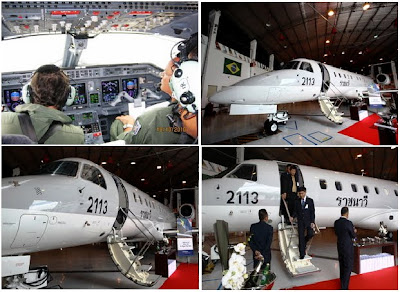 The Navy has signed a contract with Embraer Brazil for medium transport aircraft (Embraer Model EMB 135 LR) of 26 Aug 2009, in the contract requires the inspection and technical inspection of the aircraft at the location of the seller.
The Company has complied with the contract and the Navy has sent the committee medium transport aircraft with Rear Admiral Mr. Kitti Siri Nan, Deputy Comptroller Navy seaman and the Chairman of the heads of delegation had travelled to the examination of four agreements, as defined between 16 -23 October 2010 at the companys aircraft manufacturers Embraer city Sao Jose dos Compos-SP, Federal Republic of Brazil. 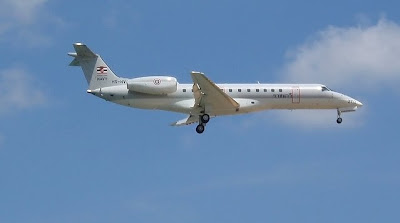 First EMB-135/ERJ-135 of the Royal Thai Navy (photo : tnano)
In the checking process, committee has engaged in flight test (Aircraft Flight Test) with the results of the inspection is generally completed in accordance with the plan to create the plane. The company has determined the aircraft delivered to the Navy at Utapao Airport on 29 November 2010, which is based on the contract.
(Royal Thai Navy)

หัวข้อ :Second ERJ-135 will be Delivered End of November 2010

หัวข้อ :Second ERJ-135 will be Delivered End of November 2010