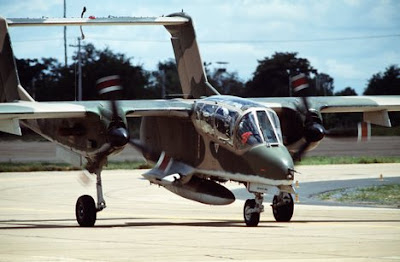 The Philippine Air Force (PAF) is set to receive OV-10 aircraft from the Royal Air Force of Thailand as donations, underscoring again the need for the Armed Forces of the Philippines (AFP) to modernize.

Armed Forces of the Philippines spokesman Brig. Gen. Jose Mabanta Jr. said that AFP Chief of Staff Gen. Ricardo David Jr. has finalized the matter to Thailand officials during his visit there over the weekend as one of the guests of Thailand King Bhumibol Adulyadej during his 84th birthday last Sunday.

“The matter has been discussed long ago but they are just talking about the particulars,” said Mabanta.

It was not clear, however, how many OV-10 Broncos are to be donated by Thailand.

According to Mabanta, the Royal Thai Air Force had previously donated OV-10s to the PAF.

It was gathered that the Royal Thai Air Force is phasing out its OV-10s from its fleet of air assets.

“They have phased these out that’s why we need modernization,” said Mabanta.

Mabanta also said that David also discussed continuing exchanges in the field of training and logistics with Thailand military and defense officials. David flew to Thailand last Saturday and is scheduled to fly back last night.

“He took advantage of this activity to renew ties between himself and the commander of the Royal Thai Armed Forces as well as other commanders of Asean armies particularly Malaysia, Brunei and Cambodia,” said Mabanta.

Among the topics that were discussed are continued enhanced exchanges of training, logistical and military hardware and our fight against global terrorism and drug trafficking,” added Mabanta.

Earlier, the Air Force received five newly-refurbished UH-1H helicopters from the United States government as promised by former US President George W. Bush. The Hueys are Vietnam vintage helicopters still being used in combat and humanitarian missions by the PAF.

In 1960s and 1970s, the PAF was among the better equipped, if not the most modernized air force in the Asean region. But now, PAF or even the entire AFP is lagging way behind the militaries of other Asean countries despite the P300 billion AFP modernization program.