Exclusive: Britain has said a rapid reaction force of warships will visit Gibraltar on its way to naval exercises in the Mediterranean, even as the fierce diplomatic row over the disputed territory looked set to continue.

The Navy’s force led by HMS Illustrious and including two frigates will sail for the Mediterranean on Monday at the start of a four-month deployment.

Three ships including the frigate HMS Westminster are due to stop later this month in the port amid a standoff with Madrid over punitive border checks for visitors to Gibraltar.

The visit was announced two days after Gibraltar’s chief minister demanded that warships be sent to stop Spanish incursions into the Rock's territorial waters. On Thursday, Fabian Picardo told The Telegraph the territory would be delighted to welcome the Royal Navy.

He said: "Gibraltar has a long and close relationship with the Royal Navy and we will be delighted to welcome HMS Westminster and the support ships back to the Rock. It is further proof, if any were needed, of the continuing strategic importance of Gibraltar and its territorial waters."

Naval chiefs stressed the visit by the nine-vessel Response Force Task Group was part of a long-planned exercise, and not in response to the diplomatic row.

But it was announced as the dispute over the territory continued despite attempts by the nations’ leaders to de-escalate the situation.

he force of four Royal Navy warships supported by five ships of the Royal Fleet Auxiliary is led by the helicopter carrier HMS Illustrious. It will consist of thousands of sailors and Royal Marines.

The deployment, called Cougar 13, will see the force sail through the Mediterranean and on to The Gulf and Horn of Africa, holding joint exercises with navies along the way.

David Cameron earlier this week said he was “seriously concerned” about escalating tensions over the border between Spain and Gibraltar.

pain has warned it is ready to impose a border tax, close its airspace to planes using the British overseas territory's airport, and investigate the affairs of Gibraltarians with Spanish economic interests.

The escalation between Spain and the British territory began last month after Gibraltar began building an artificial reef it said would improve fish stocks depleted by incursions by Spanish fishermen.

Downing Street’s claims that Spain had agreed to ease punitive border delays after a call between David Cameron and Mariano Rajoy, the Spanish Prime Minister, appeared premature after Spanish police quickly re-imposed them.

Those entering the Rock quickly found themselves in queues of up to four hours in the hottest part of the day.

Gibraltar’s chief minister, who earlier in the week likened Spain’s stance to “that of North Korea”, said the latest behaviour was just another example of Spanish “duplicity”.

“It’s about time the UK government saw the face of Spain that we see constantly. In Gibraltar we are not so surprised that there was an element of duplicity in the way Spain is going about this,” Mr Picardo said on Thursday.

Following the call between Prime Ministers, Downing Street briefed that Spain had conceded to reduce measures at the border while agreeing the Gibraltar issue should “not become an obstacle in bilateral relations” and that there was a “need to find a way to de-escalate”

However, the Spanish government issued a statement in which it made no reference to any concessions to reduce delays at the border and claimed instead that Mr Rajoy had held his ground over the matter.

“From the two such diametrically opposed briefings from two capitals, it seemed that two entirely different conversations were held,” commented Gibraltar’s Chief Minister.

The front pages of Spanish newspapers on Thursday carried headlines on the “stand-off”.

“There is an obvious defiance displayed on front pages of all the Spanish newspapers today,” said Mr Picardo. “It remains to be seen whether we are going to see that defiance played out on the ground or whether in fact they will talk tough but deliver on de-escalation that the prime minister has sought.”

He commented that perhaps it suited Spain’s ruling Popular Party to keep Gibraltar in the headlines for a few more days yet.

“There is certainly a smoke screen element to all this and the best way for Spanish government to play out August is to have Gibraltar on the front pages and not the scandals that are afflicting them.”

A spokesman for the Ministry of Defence said the annual Cougar deployment was “long-planned and well-established”.

He said: “Gibraltar is a strategic base for UK Defence and as such Royal Navy ships visit its waters throughout the year as part of a range of regular and routine deployments.

“Elements of last year’s Cougar ’12 deployment visited Gibraltar and the forthcoming visit by ships making up Cougar ’13, including HMS Westminster and the Royal Fleet Auxiliary ships Lyme Bay and Mounts Bay, are business as usual. At the same time, other elements of the Task Force will be visiting Spanish ports as part of the exercises.

“The same phase of the deployment will also see port visits in Portugal and throughout the Mediterranean to Spain, Turkey and Malta before onward transit to the Middle East.” 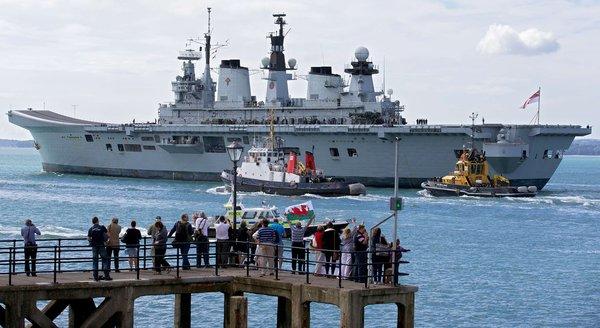 Spain will take “all legal measures” to protect its interests in its row with Gibraltar, its Prime Minister Mariano Rajoy has warned Britain.

In tough remarks, following the failure of diplomatic efforts to defuse the row, Mr Rajoy said Spain would “defend its national interests” and suggested Britain should act with “common sense and good judgement”.

Downing Street said the British position on the issue had “been quite clear” and the Foreign Office said it was aware of Mr Rajoy’s comments.

A fleet of British warships will visit Gibraltar this month in what Prime Minister David Cameron calls a “routine deployment”.

The Ministry of Defence confirmed that the frigate HMS Westminster and two auxiliary Royal Navy ships will be sent to the Rock, while another three warships will visit Spanish ports.

They will be accompanied by an elite commando group from the Royal Marines and naval air squadrons. The MoD says the deployment is “long-planned” and not connected to political disagreements.

Meanwhile Spanish Prime Minister’s intervention followed a formal protest by Britain’s ambassador in Madrid over “disproportionate” checks at the border with Spain and Spanish threats to levy a charge on vehicles crossing into Gibraltar and to close airspace. Yesterday No 10 confirmed that British warships will soon set sail for Gibraltarian waters as part of a planned exercise in the Mediterranean.

The dispute flared up after Gibraltarian authorities dropped concrete blocks in the sea off the territory’s coastline. The Gibraltar government said it was attempting to create an artificial reef to protect marine life.

However the Spanish believe the blocks were dropped to prevent Spanish fishermen from trawling in the area.

In a press conference Mr Rajoy said: “We will take legal measures which are proportionate to defend the interests of Spaniards. I hope that this issue goes no further, but Spain has to defend its national interests.

“We can and should carry out border controls like the ones which we have carried out in recent days.”

The Spanish Prime Minister’s intervention came two days after a phone call with David Cameron, who told his counterpart the situation at the border with Gibraltar was “not acceptable”.

Downing Street said that in the “constructive” phone call Mr Rajoy agreed to reducing measures at the border, but a statement issued by the Spanish government afterwards made no reference to any such concession.

The European Commission has suggested organising a “technical meeting” with the Spanish authorities about the border controls in September or October. Spain claims sovereignty over Gibraltar, which has been a British Overseas Territory since the Treaty of Utrecht in 1713.