The Royal Thai Navy (RTN) is in discussion with PT Dirgantara Indonesia (PTDI) over the potential purchase of up to 20 twin-turbo N219 utility transport aircraft,ยIHS Jane'shas learned.

PTDI officials attending the Defense and Security 2013 exhibition in Bangkok toldยIHS Jane'sยon 5 November that they expect to sign a contract in 2014 to build and supply the aircraft in collaboration with local company Thai Aviation Industries (TAI).

Officials said the agreement is likely to centre on the production of the aircraft in Indonesia with technologies transferred to TAI to facilitate localised maintenance, repair, and overhaul activities. 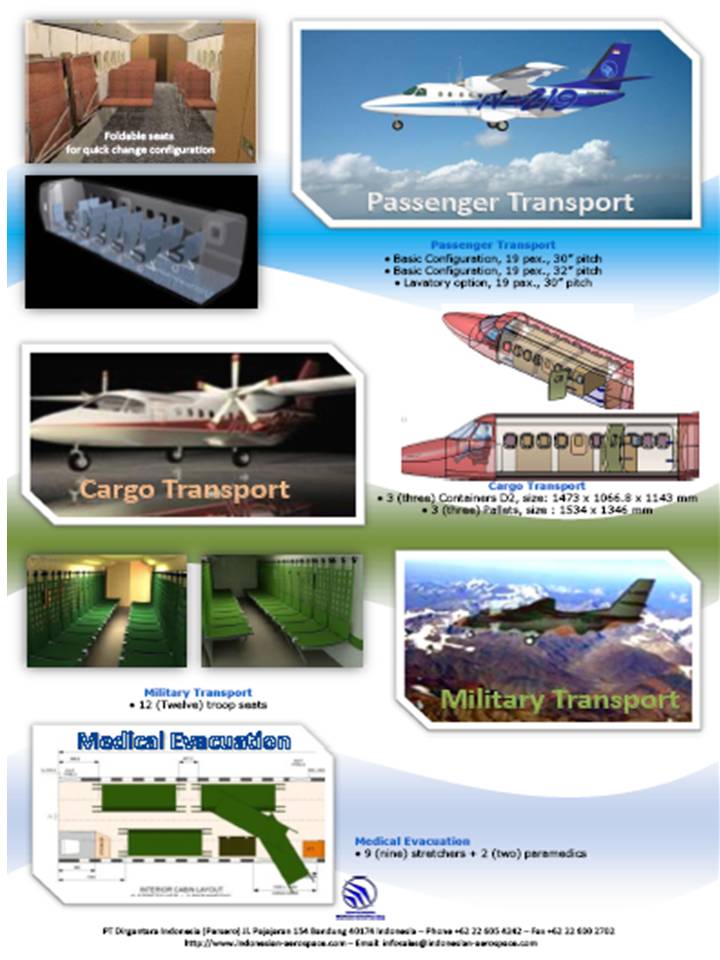 The N-219 was developed from the CASA C-212 Aviocar and, like that design, is also of all metal construction. It is claimed that it will have the largest cabin volume in its class, along with a flexible door system to allow a multi-purpose missions for transporting passengers and cargo. N-219 has been design to comply with FAR 23 (commuter category aircraft) and will be certified in 2013, with the first deliveries scheduled for 2014. Foreign certification will be pursued later. The initial price is forecast to be US$4 million each,[2] while the predicted development budget was about $30 million for 15 aircraft.[3]

Due to funding shortages loans for US$65M to develop the N-219 were procured from the $1B Qatar-Indonesia Joint Investment Fund in 2006.[4]

In June 2011, the Industry Minister requested that the Indonesian government provide Rp.59 billion (US$6.9M) to complete the N-219 prototype. Budi Darmadi, Director General of the Industry Ministry's Advanced Technology-Based Seed Industry indicated he believed that the aircraft has good market potential, due to the age of most other aircraft in its class.[5][6]

The company has received an order of 20 units N-219 from Merpati Nusantara Airlines to replace its older aircraft such as Twin Otter, with deliveries expected in 2015. The total market for the N-219 was forecast as 97 civil and 57 military aircraft.[7][8] On August 2013, the company announced that they had secured an order for 100 aircraft from Lion Air for delivery in 2016.[9]